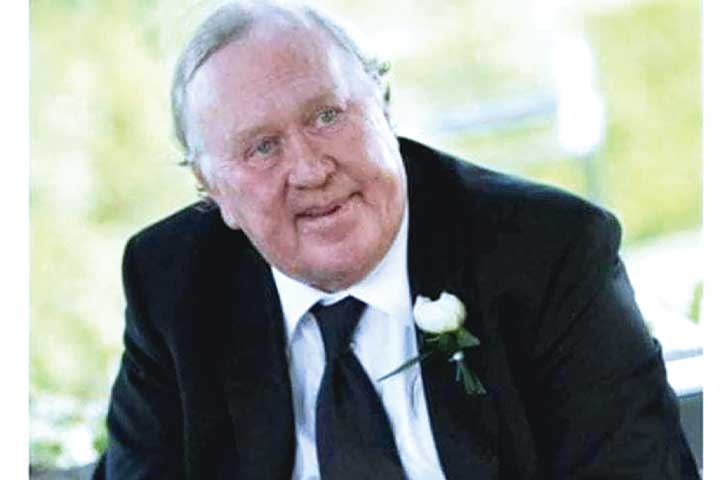 The mask on business tycoon, Derek Brink, was partially lifted recently following his demise after a long illness. His identity has been an enduring mystery because throughout his life and career as a businessman, he has kept a silent life away from the media despite the enormous wealth he has accumulated ranging from foods, farming, fuel and property business all over Botswana, parts of South Africa and Europe — writes TUMELO KOBOYATAU

WeekendPost Journalist caught up with former Botswana Building Society (BBS) Managing Director, Pius Molefe to get an insight on who Derek Brink really was. Brink holds majority shareholding in the bank that Molefe was its chief for nearly 20 years. While at the helm of BBS, his relationship with Brink was inevitable.

Brink companies have investments across different sectors, including food, beef, poultry, property, manufacturing, fuel and financial sector among others. He has co-invested with “The Old Boys club”, a colloquial name referring to a group of business partners with close ties comprising Sam Mpuchane, Satar Dada, Charles Tibone and Festus Mogae among others. Their latest investment is The Fields Mall, a shopping centre located at the Central Business District (CBD) in Gaborone.

While Brink’s net worth has not been publicly revealed, based on the empire that he owned, he was arguably among the richest people in Botswana.

“I cannot claim that I knew the man,” was the first thing Molefe uttered. He added that being unknown added a mysterious aura to Brink, his businesses and family.”

“I actually loved that about him. He was not pompous regardless of the wealth he accumulated. I think in another life I would adopt the same,” he voiced.

Through the conversation, it is noted that Molefe and Brink were close. Brink had even given Molefe a nickname.

“He referred to me as ‘My boy’,” said Molefe. “I suppose it is because I was under his tutelage both in the school of life and business.”

Molefe explains that Brink was a family man. He enjoyed being at the farm and throwing seeds to birds. It is often argued that the wealthy have no time for family, as they are continuously looking to secure the next big investment.

On the other hand, Brink brought his children into the family business and taught them the ropes.

“He knew how to balance family and business. Brink invited Derek Jr. his son and Rita the daughter to weighty meetings so that they too can have first-hand experience of the businesses. He also trusted his children’s judgement,” stated Molefe.

Molefe is also not bothered on whether the businesses will go to the vultures that have been circling since time immemorial to buy shares from some of the businesses. He went on to explain that Brink also trusted him and his judgement.

“I remember he used to come to me when he received calls from suitors who wanted to buy some of his shares. I advised him on many deals which I noticed the potential buyers were reaching out only because of greediness,” he recalled.

“I am certain his kids will carry on his legacy; he trusted them with the businesses and groomed them from a young age.”

Molefe divulged on how one of Brink’s lifelong goals was to see the Botswana Building Society (BBS) go commercial. “We often had private chats concerning BBS and he deeply vouched for it to go commercial,” noted Molefe.

He also went on that even if it went commercial, it should remain in the hands of Batswana, “Se neeleng BBS makgoa.” Molefe imitated Brink. He went on to explain that Brink was exceptionally fluent in Setswana.

Molefe noted that in preparation for commercialization, in 2017, BBS held country wide tours talking to stakeholders on the potential new development BBS would get. It is said Brink continued being supportive even though he had left the board in 2006 before the process was completed. Molefe reminisced on how even in person, Brink preferred to blend in with the background and only spoke when it mattered.

“Brink would seat back and listen to our deliberations on bettering BBS, and when the board meeting came to close after we had given up on getting a word from him about the discussions. He would speak up and contribute significantly to the discussion.”

It is also said that Brink was a staunch advocate of employee retention and he believed the only way this could be achieved was to pay good salaries.

“He believed in good payment of employees. I remember at times we would come forth with a plan to slash salaries or to retrench, we always got the same advice ‘tlogelang bana! ako lo dueleng bana.’ Disclosed Molefe.

Molefe explained that they would follow suit and the advice served BBS for the better.

Molefe recalled the most joyous he had seen Brink as during the conversion of BBS from a building society to a company.

But his ultimate moment of joy was when BBS made P70 million in profit for the first time.

Molefe mentioned that when BBS was on shaky ground, Brink would pick up the phone and wanted answers as to why that was happening, he noted that he remained calm and never shouted.

“My Boy! What is happening that side, don’t tell me I am not going to be getting my dividends because of a minor hiccup that side. I trust that you would be able to keep the business afloat.” Would utter Brink.

He (Molefe) said this was always a wakeup call to ensure that all shareholders of BBS got their dues.

It is also said that Brink played a significant part in subduing the 2021 BBS boardroom wars. Brink also had the chunk of the shares compared to any other shareholder in the building society.

Big business owners entering politics are not a new or rare phenomenon, examples of such tycoons include Donald Trump, who ran for the American presidency and succeeded.

It also seems that government remains reliant on information and consent from private businesses. The relationship between business and politics is more complex than is often assumed. It is also a relationship that is undergoing a process of change.

Many studies highlight the fact that business leaders seek to access political power and use political connections to favor their businesses.

Once in power, the market valuation of their firms increases dramatically. Surprisingly, the political power does not influence the financing strategies of their firms. Instead, business owners in top offices use their policy-decision powers to implement regulations and public policies favorable to their firms. Such policies hinder not only domestic competitors, but also foreign investors. As a result, these politically connected firms are able to capture more market share.

On the other hand, it seems politics were a non-issue for Brink. According to Molefe, Brink never mentioned politics to him.

Molefe paused to go back on memory lane and came back empty hand on the matter.

“We never talked politics. I do not remember a single instance in which we did. I suppose he had bigger fish to fry and focus on businesses,” chuckled Molefe.

He went on that; “It would not make sense for someone who has chosen not to be known to go into politics. That would just mean that he is going against what he stands for, and he was not that kind of man.”

However, Molefe hinted on something not known by many. “But I suppose he was close friends with the first president of this country.” And just like that, Molefe did not engage further on the topic.

As the curtain is closed on the life of a tycoon. Molefe hopes Brink will be remembered for his business acumen as well as to remain humble even when wealthy, he also went on to state that hard work pays as it paves a way for the creation of generational wealth.

Related Topics:Featured
Up Next

After falling to close the gap on Arsenal by losing to a record breaking goal by Kane at the Tottenham stadium.Manchester City now find themselves being charged by the Premier League with more than 100 breaches of its financial rules following a four-year investigation.

According to BBC , it has referred the club to an independent commission over alleged rule breaches between 2009 and 2018 , and also that Man-city has not been co-operating since the investigation which started in 2018 .

BBC further states that The commission can impose punishment including a fine , points deduction and expelling the club from the Premier league.

When talking at the handing over ceremony, Chull-Joo Park, said they agreed with BRCS to give out e-learning equipment to better the training skills of students living with disabilities.

“With the Information and Communication Technology (ICT) equipment and job training skills, we will be able to help the students living with disabilities to do e-learning and to better their education and job training,” said Chull-Joo Park.

It was revealed that the South Korean Embassy approached BRCS with the intent to donate equipment and educational material that includes an embroidery machine, photo copier machine, tablets and interactive boards to be utilized by the trainees.

The industrial printer is a machine that works with embroidery machine to print designs for clothing and it will enable the learners to have more material available to them to facilitate learning.

Through this embroidery machine, students will be exposed to better technologies which ultimately improve the quality of materials they produce. It will also allow students to learn business skills and run profitable ventures.

Smart board gadgets will provide the students with an elevated learning process to be fostered by e-learning. The gadgets provide a more visual element to the learning process, which in turn improves learner mental retention.

Tlamelong Rehabilitation serves the marginalized and underserved less privileged persons living with disability in Botswana. The center offers boarding services, vocational training, social services, physiotherapy and rehabilitation services for young people living disabilities aged 18-35 from across the country over a period of two (2) years per cohort which has a maximum intake capacity of 35. BRCS through International Federation of the Red Cross and Red Crescent Societies (IFRC) have managed to create great working synergy with the South Korean Embassy in Pretoria based in South Africa to support or augment the National Society’s Rehabilitation Centre’s learning challenges.

For his part, BRSC Secretary General Kutlwano Mokokomani said they are delighted to convey their gratitude as BRSC to the South Korean Embassy for donation and they look forward to an enduring partnership for such worthy causes.

“South Korean Embassy’s great gesture will enable trainees to thrive, to fulfil their dreams to become a reality as this equipments will go a long way in creating great impact in the lives of trainees and their families. We wish to convey our sincere gratitude to the South Korean Embassy for their noble gesture of donating the E-learning equipments.”

A dispute is brewing between Botswana and South Africa intelligence agencies over alleged mercenary training camps discovered in South Africa by the Directorate of Intelligence and Security (DIS).