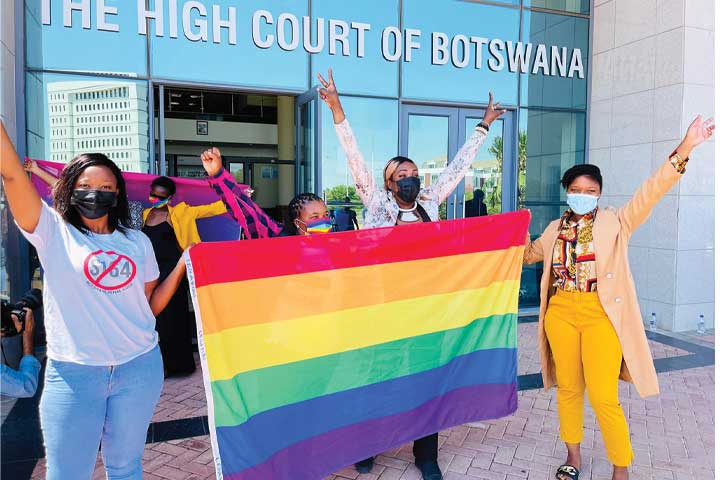 For the very first time in history in Botswana, members of the Lesbian, Gay, Bisexual, Transgender and Queer (LGBTQ+) community will be celebrated and appreciated for their active activism in promoting the movement.

This will be done through a new platform dubbed Butterfly Awards, schedule to take place in Gaborone on December 2nd 2022. Over the years, the gay movement evolved into a political and cultural force that’s fought for equality for all people through family-centered picnics, marches and prides.

Butterfly Rainbow Awards are said to be representing a new dawn, the beauty after the storm that was the decriminalization of same sex in Botswana.

In November 2021, members of the LGBTQ+ and allies left the Courtyard gratified at the decision by the Court of Appeal to uphold a ruling that decriminalized same sex relationships. The government had appealed a 2019 ruling that criminalizing homosexuality was unconstitutional.

The bench of five judges unanimously ruled that criminalizing same sex-relationships was a violation of the constitutional rights of LGBTQ+ individuals to dignity, liberty, privacy and equality.

When addressing members of the media this week in Gaborone, Butterfly Rainbow Awards Director Karabo Mokgware said the purpose of the awards is to liberate, honor and celebrate people of the diverse community that have made not just decriminalization a reality but continue to promote and defend the LGBTQ+ community.

Mokgware stressed that these members of the rainbow exhibit such qualities that will not only helm them in achieving their goals, but also bring glory of success to their movement. “We have gathered here not just to share our triumph and aim towards liberating our communities, but also to give due regard to our values and morals which have exemplified our discipline, compassion and zeal for freedom”

When emphasizing on the role awards play on members of the LGBTQ+, Mokgware indicated that they encourage good behavior and inculcate the spirit of inclusion and encouragement.

“This is why Butterfly Rainbow Awards saw it fit to partner with Lesbians, Gays and Bisexuals of Botswana (LEGABIBO) as our mother organization that has not only impacted many of our communities, but has also encouraged many of our individuals to be themselves.”

The Butterfly Rainbow Awards will be divided into eleven categories, which include five honorary awards to members of the LGBTQ+ who are seasoned LGBTQ+ community members for their influence, impact, achievements and continued advocacy for the LGBTQ community in Botswana. Some of these recipients will be identified from sport, arts, business, media and community development.

“The awards are not about celebrating those who have done exceptionally well in their right, but also to honor those who excelled in strengthening the movement. We strive to recognize that extra effort of our communities and motivate them to shine in their respective fields,” Mokgware said.

Other categories lined up are: social media personality, community champion, hunk of the year, sport person of the year and social butterfly of the year. Mokgware told WeekendLife that the nominees will have to apply and submit a traceable record of their work, and finalists will be selected by the public, a panel of judges and those engaged to make final adjudication.

When keeping the media updated about selection criteria, he said they are going to be taking applications with outstanding work that has been done since 2019 to date. This is mainly because the two years of COVID-19, there was actually no chance to celebrate the work done by the LGBTQ+ members and allies due to restrictions put in place to curb the contagious contagion.

BACK WITH A BANG: GIMC returns

In May 2014, controversial pint sized musician, Odirile Sento married his longtime girlfriend, Kagiso Sento in a glamorous wedding, not knowing that eight years later, the two will be fighting until the very end of their holy union.

Mental health is one critical element in someone’s life but gloomily, it is often overlooked. Topics centered on mental health and depression dominate the public discourse. The national conversation surrounding mental wellness, both online and offline has aided in the stigma of suffering from depression being removed, slowly but surely.

The Brunch will be held at Myhomecafe by Mogobane Dam and tickets are selling at P650 per person. Only 50 tickets available and sold through pre-booking. The value of the offering will be a brunch meal + bottomless mimosas + connekting conversations that matter with leading women in corporate and entrepreneurship. This is an inspirational / empowerment connekting session for Women.

Bash Connektor is a Marketing Company with a twist founded in March 2022 by Basadi Bash Masimolole who has 15 years plus Marketing Experience. The INTENT of Bash Connektor is to Link People, Experiences, and Brands. The K instead of C is INTENTIONAL. We are all about contributing towards AMPLIFYING brand and country messages through curating experiential offerings and connekting conversations that matter, said Basadi Masimolole.

With a sponsor or funding, Basadi Masimolole’s ultimate goal is to have visual podcasts and empowerment connektor sessions at villages as part of cultural tourism and contributing towards the Botswana Government’s Rural Areas Development Program (RADP).