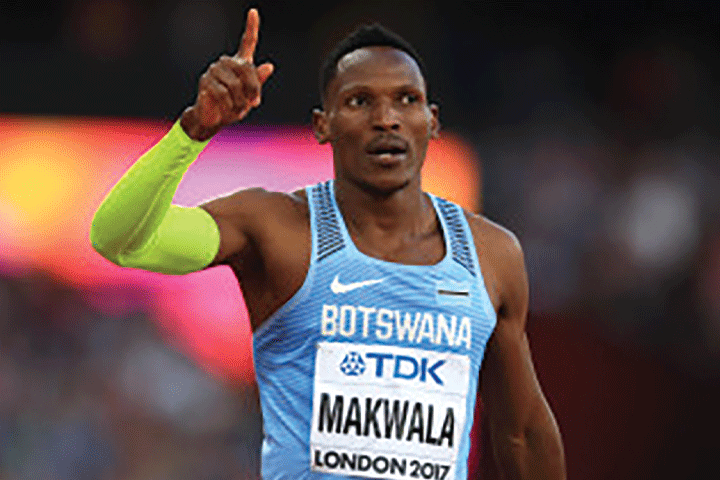 Famously known for his signature celebration of taking push-ups after an impressive run during IAAF World Championship held in London in 2017, Botswana’s top sprinter who specializes in the 400 metres is finally closing his athletics chapter.

Isaac Makwala leaves behind a number of golden moments created in his 15-year span as a professional runner and the most talked about athlete to ever emerge from Botswana.  Makwala is calling it a day next week after the Wanda Diamond League that will be held in Zurich on Thursday and Friday respectively.

After the groundbreaking premiere last year, the Athletics Festival 2022 will be even bigger, made possible by the mostly free standing area in the middle of the arena.  Taking a closer look into Makwala’s career, the Tutume born athlete has had both blissful and miserable flashes, with his sprinting abilities hitting the very bottom towards the climax of his line of business. Makwala has been lately missing the podium finish, probably because age has caught up with him or perhaps sport politics had a shattering impact on his focus.

Isaac Makwala was the gold medalist at the Commonwealth Games in 2018. He has also won continental titles at the distance, winning at the 2015 Africa Games and twice at the African Championship in Athletics (2012, 2014). He also represented Botswana at the 2016 Summer Olympics, three times at the Commonwealth Games, and five times at the World Championships in Athletics (2007, 2009, 2013, 2015, and 2017).

With the Botswana 4×400 metres relay team, he has won the bronze medal at the 2020 Tokyo Olympics, a silver medal at the 2017 IAAF World Relays and medals at the African Games and Championships. His personal best time of 43.72, set 5 July 2015 in La Chaux-de-Fonds was an African continental record and ranks him number 8 on the all-time list, the second fastest non-American. He is also a sub-20 200 metres runner.

He qualified for 400m final at the 2017 World Championships, before being withdrawn from the race, due to illness. He then qualified for the 200m final, placing overall sixth. He competed in the 400m at the 2020 Summer Olympics, finishing 7th in the final.

Even though Makwala has a number of medals under his name, and has represented the country conscientiously, he has had a share of hullabaloo, ranging from being vocal about the ill-treatment, withdrawing from some championships to finishing last in his races. He poured some of his grievances on social media. Makwala retired from the Botswana team and withdrawn from participation in the Commonwealth Games which were held in Birmingham. The athlete said this was done to allow him to focus on the upcoming Diamond League competitions, which he cited as being his focal point, given the financial benefit and improvement to his general welfare.

“Ok let me say I retire now. What will happen to your life? Will your life change? Will your salary increase? Will you get a job or a better one? I think the only people you guys should ask to retire are your area MPs, Ministers or Councilors people those are people that you have power to ask to retire not me. You didn’t vote me to run and this is my career so you can’t tell me what to do,” Makwala threw jabs at some of the critics who advised him to take an early retirement.

In setting the record straight further, Makwala said “For your own information, I am here by myself. I don’t get any help or funds from Botswana Athletics Association (BAA), Botswana National Sport Commission (BNSC) or Botswana National Olympic Committee (BNOC) or government even. I pay everything from my pocket.”

“I think athletes should have their own reports when they come back from the games because they are the ones who get affected at the end of the day. There are lots of things that happen and they are never voiced out. These are things that frustrate athletes.”

“Did all my best today but it wasn’t enough to take me to the finals. It’s part of the game and I am really proud of myself. It’s been a long journey from 2006-2022. I thank God for everything.”

Dinaledi miss out on 2023 World Cup

Athletics clubs run out of finances

Athletics is one of the sporting activities that for many years has been consistently performing extremely well in international competitions. One of the reasons is the availability of qualified and experienced coaches, who have been working tirelessly on the ground to ensure that they scout talent and develop more athletes.

For the first time after eons, football clubs plying their trade in the elite league are walking in the shadow of the undefined with nothing concrete agreed and on sight before the commencement of the football season.

The current world Under-20 100m record holder, Letsile Tebogo’s anticipated move to the United States of America (USA) has been put on hold, WeekendSport can reveal.