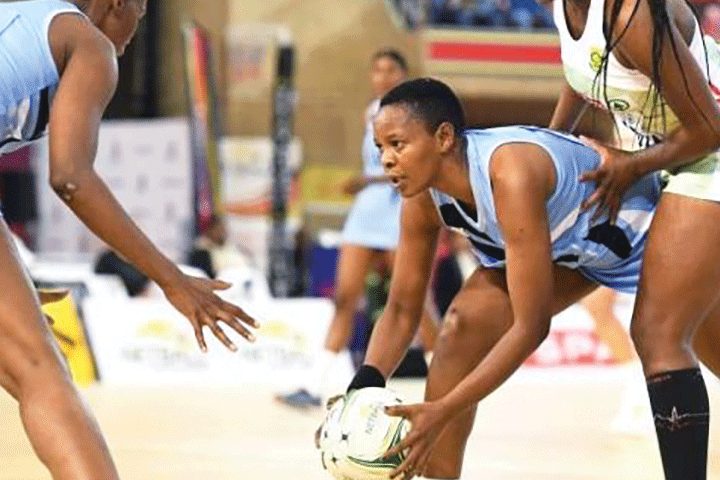 Botswana senior national netball team, Dinaledi, has been lauded for an impressive showing, galvanized with a bit of growth at the Africa Netball World Cup qualifiers which are to reach business end today in South Africa despite winning only two games and losing a further two.

The results saw them miss out on a spot in the semifinals and ultimately a flight ticket to the biggest quadrennial international netball world championship to be held from 28 July to 6 August in 2023 at the International Convention Centre in Cape Town, South Africa which will mark the first time the tournament is staged on the African soil.

The two top finishing teams from the qualifying event will be invited by World Netball to compete at the NWC2023; this however does not include South Africa who has already pre-qualified for the NWC2023 as hosts.

Dinaledi coach Jenny Van Dyk told WeekendSport that she was impressed with the performance of her troops but could have fared way better.

“Looking at how we played (in Pretoria) and how we did in our last competitions beforehand, the team has showed immaculate growth as far as our style of play is concerned but had we, like other nations, played international friendlies and prepared well prior to these qualifiers, we could have done better because the team is immensely talented,” Van Dyk said.

International games with other netballing nations, Van Dyk said, provide the team with the necessary game time, experience and character therefore they are very vital leading to such tournaments of prestige.

Botswana were placed in Pool A with neighbors South Africa, Zimbabwe, Namibia and Tanzania and finished on the third spot behind South Africa and Zimbabwe.

Mokeresete Mokeresete, who is the Mouthpiece of the Botswana Netball Association (BONA) shared the same sentiments with Coach Van Dyk and told WeekendSport that although they fell short, the team played some impressive piece of netball.

He added that had Coach Van Dyk joined the team a bit earlier, the team could have done a lot better than they did and sworn that the future looks brighter for the team, as long the problems they encountered currently are rectified and worked upon.

Mokeresete concluded by promising that they will show up at next year’s Africa Cup at their very best more so that now they know what they need to work on to get the best out of the players and hopefully, they carry on with majority of the current crop, if not all of them.

But there is an alternative interpretation of the outcome, Former Botswana Netball Association (BONA) Tebogo Lebotse-Sebego questioned the criteria used as she believes South African netball team also known as Spar Proteas was not supposed to take part in Africa Netball World Cup qualifiers as they have already secured their place by virtue of being the hosts of the 2023 Netball World Cup.

Furthermore, Lebotse-Sebego who is also former Africa Netball President said since they were allowed (South Africa) to play the qualifiers, they should have played for the netball rankings and their results should not be part of their qualification results.

“In essence for the purpose of qualification, Botswana has finished in the top two (2) from the group stages and therefore proceeds to the semifinals against the other top two (2) to determine the final two teams that will qualify for the upcoming World Cup.

Going to the qualifiers, Dinaledi went down fighting against Spar Proteas. They lost 37-60 in their opener. Dinaledi started off by sending a strong message to their opponents winning the first quarter 12-11.  The Proteas bounced back in the second quarter winning it 11-15. They also claimed the third quarter 9-22.

Despite the score lines coach Van Dyk said the last time they played South Africa, the difference was 60 points and today they have trimmed the margin to only 20 points. “That is a step in the right direction. This is our first international game this year. The girls are good to go. This is a team that can qualify for the World Cup,” she said.

Their second game of the campaign was against 13th placed side, Zimbabwe in which they lost by 49-41 on Monday before tasting their first victory when they beat Namibia side by 45- 43. Dinaledi wrapped up their qualifiers campaign with 54-45 win against Tanzania.

Athletics clubs run out of finances

Athletics is one of the sporting activities that for many years has been consistently performing extremely well in international competitions. One of the reasons is the availability of qualified and experienced coaches, who have been working tirelessly on the ground to ensure that they scout talent and develop more athletes.

For the first time after eons, football clubs plying their trade in the elite league are walking in the shadow of the undefined with nothing concrete agreed and on sight before the commencement of the football season.

The current world Under-20 100m record holder, Letsile Tebogo’s anticipated move to the United States of America (USA) has been put on hold, WeekendSport can reveal.