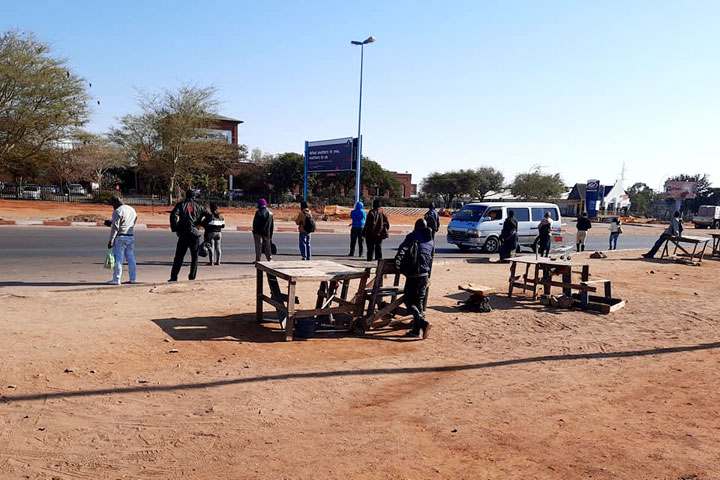 Botswana has recently experienced a dramatic surge in the number of COVID-19 cases. Government communicated through the Presidential Task Force Team that there were new positive cases that were recorded in Mogoditshane, Oodi and Gaborone respectively.

On Wednesday evening, Minister of Health and Wellness, Dr Lemogang Kwape said the country recorded 30 new cases. It also emerged that a patient tested positive for COVID-19 at Bokamoso private hospital, and during contact tracing eleven people tested positive for the virus in Mogoditshane. According to an official communique from government, ten of these people were students.

Further, a Motswana who is an essential service provider tested positive for the deadly virus following a failure to quarantine upon arrival in the country. The country also recorded a new case caused by illegal border crossing by a citizen in Good Hope.

In respect of cases in Gaborone, a Motswana adult male with no travel history tested positive for the virus at Gaborone Private Hospital. Coordinator of the Presidential Task Force team, Dr Kereng Masupu said in a statement that these positive results mean that the country is likely to experience a surge in local COVID-19 cases.

Following extensive contact tracing to investigate COVID-19 cases that were recorded early this week, the task force team indicated that four educational institutions in Gaborone were exposed to Coronavirus. In a statement, the team designated that the Botswana Open University, Masa primary school, Bonnington Secondary School as well as Terrence private school had traces of the COVID-19 virus.

However, the health experts shared that officials have been deployed to carry out extensive assessments and course of action on the alleged cases at the four institutions. The group also advised parents, guardians and employees of these institutions to self-quarantine until they are cleared.

When addressing the nation on Wednesday, Deputy Coordinator of the task force team Professor Mosepele Mosepele said they have realized a worrying trend of a big surge in local spread of the virus, something that never happened before.

‘’We are experiencing a double increase in the number of cases in the country. Exactly two weeks ago, our COVID-19 cases were at seventy and double to one hundred and forty. This is a great concern, as the number of deaths have now reached two. In our statement released yesterday (Tuesday), we indicated that Mogoditshane has become a high risk zone as students and a teacher were infected in one school.

It is an extreme distress because these children live with parents, siblings and most of them use public transport, so chances that they have spread the virus are very high.’’ His team is investigating the source of the recently recorded cases that include 22 children from one school in the capital Gaborone, he said. Mosepele stressed that it is a trial to contact trace these cases as registration in public transport is not done efficiently.

‘’Batswana has now diverted to disregarding some of the health protocols. It is difficult to do contact tracing as people who use public transport do not keep a register of the passengers. We have since observed that some people gather together in private and public places in large numbers, and to a certain extent, some host parties and social sessions. We do not put up with these occurrences and events, as the virus is now rapidly spreading.’’

There was a holiday in the country two weeks back and prior to that local cases were reported to be at seventy. According to Director of health Services Dr Malaki Tshipayagae, the holiday might have contributed to the surge in positive cases as many cases of illegal gatherings were reported.

Botswana had been doing relatively well in managing the spread of the virus since the first case was recorded in March. The country has to date recorded two deaths from the virus and over 80 percent of cases had been those of foreign national who were on transit or truck drivers delivering essential goods.

Tshipayagae further expressed concerns about the dangers posed by people who cross borders at illegal points, especially to neighboring South Africa which has recorded over 400,000 cases and over 6,000 deaths. Botswana borders remain closed, except for essential travel that has to be authorized.

He said if the situation gets worse than it is, they will be forced to undertake other measures to prevent further spread of the virus, including a lockdown. The country was on lockdown for almost two months between April and May, but was slowly opened up to allow the economy to run.

Minister of Health and Wellness on Wednesday evening placed Gaborone under total lockdown for a period of two weeks following an “unexpected turn” in the number of new COVID-19 cases.
He made the announcement in a televised public address via a national television, Botswana Television, saying the city will go under lockdown from midnight. This follows an announcement of 30 new cases in the last 24 hours in a city of an estimated 231, 000 people, he said.

“During the course of this week, the disease has taken an unexpected turn. This now requires us to place the greater Gaborone COVID-19 zone under lockdown for a minimum period of two weeks,” said Kwape. Kwape said that a period of two weeks is enough to enable health authorities to contain the disease.

The third edition of lockdown in the Greater Gaborone zone sent anxious people racing for essentials as an unprecedented 14-day lockdown across the zone. Many shelves in the malls of Gaborone were stripped bare of staples as the country’s mostly affected zone lurched into a shutdown aimed at slowing the spread of the new coronavirus.

Some people were blocked at the Dibete checkpoint, trying to make way into another zone that is somehow free from the COVID-19 crisis. The law enforcement officers were called upon to settle the dust, and permit only essential service providers.

Minister of Presidential Affairs, Governance and Public Administration, Kabo Morwaeng together with Permanent Secretary to the President (PSP) Elias Magosi, this week refused to name and shame the worst performing Ministries and to disclose the best performing Ministries since beginning of 12th parliament including the main reasons for underperformance.

Of late there have been a litany of complaints from both ends of the aisle with cabinet members accused of providing parliament with unsatisfactory responses to the questions posed. In fact for some Botswana Democratic Party (BDP) backbenchers a meeting with the ministers and party leadership is overdue to address their complaints. Jwaneng-Mabutsane MP, Mephato Reatile is also not happy with ministers’ performance.

Bokamoso Private Hospital is battling a P10 million legal suit for a botched fibroids operation which resulted in a woman losing an entire womb and her prospects of bearing children left at zero.

The same suit has also befallen the Attorney General of Botswana who is representing the Ministry of Health and Wellness for their contributory negligence of having the unlawful removal of a patient, Goitsemang Magetse’s womb.

According to the court papers, Magetse says that sometimes in November 2019, she was diagnosed with fibroids at Marina Hospital where upon she was referred to Bokamoso Private Hospital to schedule an appointment for an operation to remove the fibroids, which she did.

Magetse continues that at the instance of one Dr Li Wang, the surgeon who performed the operation, and unknown to her, an operation to remove her whole womb was conducted instead.
According to Magetse, it was only through a Marina Hospital regular check-up that she got to learn that her whole womb has been removed.

“At the while she was under the belief that only her fibroids have been removed. By doing so, the hospital has subjected itself to some serious delictual liability in that it performed a serious and life changing operation on patient who was under the belief that she was doing a completely different operation altogether. It thus came as a shock when our client learnt that her womb had been removed, without her consent,” said Magetse’s legal representatives, Kanjabanga and Associates in their summons.

The letter further says, “this is an infringement of our client‘s rights and this infringement has dire consequences on her to the extent that she can never bear children again”. ‘It is our instruction therefore, to claim as we hereby do, damages in the sum of BWP 10,000,000 (ten million Pula) for unlawful removal of client’s womb,” reads Kanjabanga Attorneys’ papers. The defendants are yet to respond to the plaintiff’s papers.

Fibroids are tumors made of smooth muscle cells and fibrous connective tissue. They develop in the uterus. It is estimated that 70 to 80 percent of women will develop fibroids in their lifetime — however, not everyone will develop symptoms or require treatment.

The most important characteristic of fibroids is that they’re almost always benign, or noncancerous. That said, some fibroids begin as cancer — but benign fibroids can’t become cancer. Cancerous fibroids are very rare. Because of this fact, it’s reasonable for women without symptoms to opt for observation rather than treatment.

Studies show that fibroids grow at different rates, even when a woman has more than one. They can range from the size of a pea to (occasionally) the size of a watermelon. Even if fibroids grow that large, we offer timely and effective treatment to provide relief.

The Alliance for Progressives (AP) President Ndaba Gaolathe has said that despite major accolades that Botswana continues to receive internationally with regard to the state of economy, the prospects for the future are imperilled.

Delivering his party Annual Policy Statement on Thursday, Gaolathe indicated that Botswana is in a state of do or die, and that the country’s economy is on a sick bed. With a major concern for poverty, Gaolathe pointed out that almost half of Botswana’s people are ravaged by or are about to sink into poverty.  “Our young people have lost the fire to dream about what they could become,” he said.

OFF THE HOOK: Bakang Seretse and Kenneth Kerekang have been set free

Do NOT follow this link or you will be banned from the site!